Another foggy morning. Quiet night. Strength now about 785, exclusive of officers. A man was sent some nine months ago to learn how to make charcoal, and as wood is plentiful here we have started it. I don’t know the process except that a deep pit is dug and wood put in and lighted, and hole covered with corrugated iron.

Such a foggy morning after a frost. We got in safely last night quite early. No. 7 Ravine was not our ravine. It was opposite us when we were in the other bit. I think the redoubt mentioned was one we didn’t know of. They apparently took Beaucourt Redoubt fairly easily. Holt has built an open fire place here, in which we can burn wood, and get up great warmth. It smokes a little, but is a great boon. Yes, the Naval Division attacked over the very ground we and the 12th were allotted.

9.45 p.m. The fog never lifted all day, and we did some good work, wiring, etc. Trenches very messy and crumbly. I was up to my knees in muddy slime in some parts, gum boots the only foot wear possible. The Padre and a plumber we have lately discovered in the ranks have remedied the flue of the open fireplace here, and it is splendid tonight. No smoke, and a great heat. Bosche put over a few oil cans [trench mortars] about 7.30 a.m.

Draft arrived last night and am going to see them this p.m. Tom Stewart is back, I hear. 34 from 10th Battalion, and remainder English. Padre deserted us today for the back areas. His subaltern, quite a nice fellow, took our service. Stephen Gwynn and Willie Redmond, both over 50, are Coy. Commanders in 16th Div. Really rather fine. They say W.R. [Redmond] is a most excellent personality. Fine day, but river in flood, I hear. Sergt. Lucas, who got M.M., shot the pigeon.

9.45 p.m. I have to be off early in the morn, as Gen. N. is inspecting the new draft. I saw them this afternoon. Three of our old men, 34 from the 10th Battalion, and 100 from London Territorials, with an average of four months’ service. Not a bad lot I think; one Russian amongst them. Padre delighted in ‘Student at Arms’.

Such a day, torrents of rain. Draft of 137 expected tonight. Am sending three officers and some N.C.O.’s to look after them in the back areas, as they are not to come into the line this time. Great officers’ rugby match with 12th yesterday. Result, they beat us by one goal after a good game. Guns were noisy last night up to midnight—much warmer. Had another fire going in my hut and was very cosy from 5.00—7.00 p.m. Great loss the ‘Britannic’. We used to see her in Belfast. Fear the Roumanians are in a bad way.

His Majesty’s Hospital Ship Britannic was a sister ship to RMS Olympic and RMS Titanic, all of which had been built in Belfast. She was not completed until 1915, when she entered service with the Admiralty as a hospital ship. On 21 November 1916 she was sunk by a mine laid near the island of Kea in the Aegean Sea. Of the 1,065 crew and medical staff on board (she was on her way to Lemnos to collect wounded and sick) only 30 were killed. One of the survivors was Violet Jessop, who had also survived the sinking of RMS Titanic in 1912. 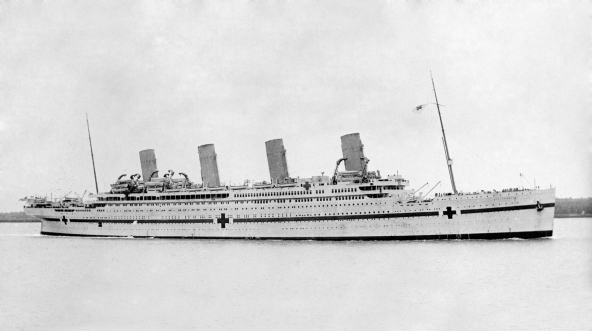 Such a cold, bitter sunless day, with piercing wind, but dry. Padre and I both loved Burrough’s book. Both wounded men back with Battalion. A draft of 137 on their way from the Base, mostly English, I expect. Couldn’t stand the damp of my chateau, so rigged up a stove yesterday, which has dried things. Dearth of oil here now.

A foggy day with gleams of sunshine. Cold night. Everything so damp. The 11th Innisk’s beat us 2—1, to Pratt’s great delight. A good game. Many of the officers came over. A very nice lot they looked. R. lost five officers, two k., and three wounded by a T.M. which landed on Coy H.Q. the day before yesterday. Capital sending the £21 for the plum puddings. Yes, I think dry sunny frost days would be preferable but the nights would be trying. Wet is damnable. Yes, Foster’s people should get his M. Medal. Mudie and Saunderson were over here today. Place had shingles’ and is run down. Wilson also visited us helpful and capital. The mud here is bad; luckily no rain.

All safely in by 7.30 p.m., dark and foggy. Only two casualties during the tour. Cold night and rain after midnight. Today fog cleared, and sunny. Saw Holt. They’ve got a draft of 100 Cockneys. Turned out sunny. We’ve started making charcoal now, with seeming good success. Still foggy. We play Pratt’s push at football this p.m. These tin shanties are cold.

A white frost last night, fog this a.m., and sun coming through, giving promise of a glorious day.

4.30 p.m. Fog never lifted. It was a splendid day for wandering about in front examining wire, etc. Not a man had any sign of drink after B_____ [Bailleul]. I was only out for three hours this a.m., and was never in a trench at all so thick was the fog.

4.30 p.m. No rain today after all, and though everything is messy we have got the trenches square. I find Ovilux no good for this sort of warfare, heavy and a bother. The little Vickery’s one is splendid. Yes, it’s splendid getting Beaucourt. They may find some traces of our men. We don’t get real gales out here, but wind is not bothersome. Pratt’s come in for lunch and gave me much useful information. It was a really good show, 170 in the raid, and only one killed and 13 wounded, and remained in the Bosche lines for an hour. Saxons have replaced Wurtemburghers—from the Somme, and rather weak.

The wristwatch, ususally worn by women, came into its own during the First World War. J C Vickery imported watches and straps that were very popular. The other watch referred to—the Ovilux—has not been identified.

BLACKER'S LETTERS – WITH THE ‘NINTH’ IN FRANCE
Create a free website or blog at WordPress.com.