Such a lovely sunny day, but cold. We are off tomorrow, 3 days’ march, and into trench line night of February 5-6. Not the same place, just further south. We go to our old friend P_____ [Puchevillers], but in two marches, then M_____ [Martinsart] where we stop. I fancy it corresponds to M.M. [Mailly-Maillet] 107th Brigade come back much to their disgust. We and they in the line, 109th in reserve. I suppose we shall go 6 days in and 6 days out. Quite interesting to see a new lot of trenches. Fancy they are all right. Am glad to say we keep the other Div. Artillery-Willie Strong and Co. Berry is doing Transport Officer, and Scott, Medico for the march. Stronge and Pratt return on Saturday night, the night we go in. Pleasant return! Just had my hair cut very close for the trenches, by a company barber!

107th Brigade had been attached to 4th Division since early November. 36th (Ulster) Division was the first New Army division to be committed to the line intact, as originally constituted, on its first deployment.

A 10 mile march, roads dry, and keen frosty air. Quite a nice little village and comfy H.Q. We go tomorrow at 9:30 to where I said, next to Hedauville, then on and into line. Kentish, who commands 1st R. Ir. Fus., just looked in full of esprit de Irish Fusiliers. Coming to see us tomorrow when we start.

Came on in motor bus here at 7 a.m. with Cather, ‘At.’ and Ensor to see trenches and make arrangements about taking over. Go back to P­­­­­_____ [Puchevillers] this evening. H.Q. dug out, four beds in cellar in village; two companies in trench line, one in reserve, one in support. In for 6 days I expect. Taking over in the dark. Will be a long business. Such a cold drive, about 30 miles. All round the country; took 3½ hours. G_____ returns from leave tomorrow. 1st Hants here, whom we take over from, commanded now by Middleton, who married Miss Duprey [sic].

Holding this place and will go into line one mile away in evening. Hard march yesterday on greasy road. All well. G returned. Lovely day. Left our billets at 6.00 a.m. in the dark and got here at 9.00 a.m. Transport two miles from last night’s billet entailed much complication. Some vehicles to come with us, like cookers, water carts, and some wagons, remainder having to go to our transport billet. Difficult work sorting and packing. However, we got off to time. Expect relief will be a long and tedious job.

We got in all right last night and finished taking over at 10.00 p.m. Kits and men and horses were late and we didn’t get anything to eat till midnight. We were all tired as we left at 6.00 a.m. which necessitated rising at 4.00 a.m. A very interesting part of the line. Our H.Q. in a cellar in a small village, but it’s unsafe to move on the village roads in the day time, only by trenches, and at night they suddenly turn on a bouquet of whizz-bangs in to a bit of the road they suspect movements on. Our cookers, etc., were shelled coming in last night. No casualties, but we shall have them here if men persist in walking about in the day time. Three of the C.O.’s in 107th have gone. Omerod, Chute and Ford-Hutchinson. Been all round the trench line this morning and am mapping it this p.m., and letting Cather go round. There is such a lot to organise and arrange here, I have not time for more than scrappy letters. Am feeling loss of Adjutant rather, but Cather has done splendidly.

The Battalion would take its turn in the line here at Hamel until after the attack on 1 July 1916.

A busy day, but mostly in the cellar. Russell came to see us, and the man commanding the Battery-one Wilson. I don’t know him. The poor unlucky Downs had about 50 4.2s into their line a.m. and lost three men. Things have been very quiet on our front all day. Have plenty soup stocks and choc. at present, both very useful during the move. Was up early this a.m. and it was glimmering dawn at 6:30 a.m. ‘At.’ and Charlie Johnston are splendid. He took me out to his advanced post this a.m. Ken is still doing Staff Captain. Yes, the Speaker’s letter was A1. Do you gather where we are? About 2 miles to 2½ miles S [south] from our last time in the line.

9.00 a.m. Quiet night. Went round the line from 10.00 p.m. to midnight. Raining and sloppy, and very dark. Fine today and colder. They are already asking for countless returns and harrying reports, &c., which entail me spending most of the morning inside, writing and at the end of the telephone. About the identity disc, the only advantage is you needn’t take it off. A quiet night and no casualties so far. Accounts out here with francs, &c., have to be kept very clear. Have a busy morning. Was up at 5:30 a.m. visiting an outpost you can only get to in the dark. Messages come in every minute. Send nothing more yet. Everything is dumped 1½ miles off and has to be carried.

Hadn’t a minute yesterday. They’ve sent a Res. Lt. Col. [reserve Lieutenant Colonel] to be attached for two days to learn trench work. A nuisance he squashes us so. We gave the Huns half an hour strafe in retaliation for their strafe on the Downs yesterday a.m. 9 2 in., 8 in. Hows. etc., all on their trenches. They put back a few whizz-bangs into the village. One man of ours had his cheek grazed, otherwise quiet, and a quiet night. Snowing this morning which will make the trenches damnable. Am writing in the cellar while two others are dressing, and the breakfast things are being put out, and much turmoil. Griffiths, [sic] Smith, [sic] and C.C. came round in a.m. Latter didn’t show a liking for the sound of bullets. 10 a.m. Snow stopped and turning out fine, but everything very wet and slushy, and cold. Art’y [artillery] observing officer last night was Vallentine, [sic] son of the Gunner who drove Woolwich coach. Do you remember him? Such a squash in here. Very hard to keep things tidy. 6 p.m. They are shelling Div. [32nd Division] on our left very heavily. Continuous roar of heavy guns. I walked out with Johnstone [sic] across the marsh to their nearest battalion about 4 p.m., and examined the ground in front of our line from them. We had only left them a short time. The Capt. who we met was Knott, whose brother was James Richardson’s secretary at Bessbrook—16th Lancs. Fus. Bull and Cole-Hamilton came in to see us today. They are reserve about 1½ miles away. I hope they relieve us. Nothing settled about reliefs. I expect we go back on Friday or Saturday. Fergie written to say a shell dropped near his store today, 3 miles back. I expect it was the empty case of an Archie. The strafe has died down. Some excitement reported from one of our outposts. Just got Johnstone [sic] on telephone from the outpost. He says that he got a report that Germans were in the old mill, about 30 yards from our post. I went down and they threw a few bombs into the mill, and nothing more happened. 10.00 p.m.—All quite quiet again. Clear, frosty night; going to lie down.

At this time, the frontage of 36th (Ulster) Division extended north-west from the River Ancre; hence 32nd Division being on its right. It would not be until March that the Division would extend its line into Thiepval Wood and straddle the River Ancre.

Lieutenant Colonel Blacker’s hope that the Battalion would be relieved by 12th Royal Irish Rifles proved prescient—for the rest of the war, until brigades were reduced to three battalions, these two battalions would be ‘paired’ and would relieve each other time and time again in the trenches of France and Flanders. 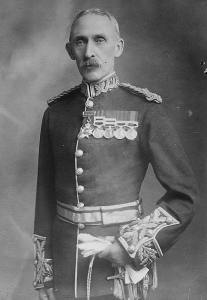 9.00 a.m., lovely sunny day, after sharp frost. A poor fellow, Elliott, shot last night returning from a patrol. Fear won’t live. Shot by our own people. Failed to give warning that the patrol was going out I fear. Otherwise, quiet night. They are shelling or registering on a village about 300x [yards] behind our cellar. Another man just reported wounded by a shrapnel bullet in the leg. Must go off and see them. The 12th relieve us tomorrow, but we only go back a mile. A Hun aeroplane, with British marks came over today and dropped two bombs on the 12th, killing one and wounding four. A good deal of firing all day from German 4.2 guns and field guns. Three shrapnel into village dropped close to where the two wounded men were. Unfortunately they could not be moved before dark. They are safely away now, but had to be carried a mile to the ambulance. The Corps. Gen. Anderson and Brigadier were round this a.m. He (A) has aged a good deal. Lovely sunny day after frost. No more casualties. Little Berry much cut up about the wounded men. He and the Padre were with them all day. Relief tomorrow will be a long business. Don’t expect to be back at M­­­­_____ [Mesnil] before midnight. Not much of a rest place I fear, All water has to be carried 1½ miles.

Injuries caused by shell fragments from exploding shell casings were not known as ‘shrapnel wounds’—that term was used to describe the wounds caused by shrapnel balls. This cutaway is of a British 18-pound shrapnel shell in the Canadian War Museum in Ottawa; German shells functioned in a similar manner. The shrapnel balls (approximately ½–inch in diameter) were embedded in resin. The fuze in the nose ignited the powder charge in the cavity in the base of the shell as it approached the target, which propelled the shrapnel balls forward out of the case—the effect was similar to a shotgun blast. Shrapnel injuries were often severe and classified as ‘gunshot wounds’ due to the similarity of effect on impact.

A quiet night, but turned wet—a cold sleety rain falling. Everything very sloppy and horrid. A leaden sky. They’ve sent us a Major—in 4th D. G. [Dragoon Guards] Reserve Regiment. Came out for instruction, to add to our squash. He is at Tidworth where Bishop is. B came out a month ago for a like tour, and had a bad time with weather and discomfort, and returned sick to England. Here we are in the village of _____ [Hamel] and go tonight to _____ [Mesnil] and stay for 6 days, then back here. Am fearfully dirty and muddy.

BLACKER'S LETTERS – WITH THE ‘NINTH’ IN FRANCE
Blog at WordPress.com.