The 500 pairs socks have arrived safe, so we are splendidly off. Still 80 men not been on leave who came out with us. No one goes a second time till all have gone. All our arrangements for today—presentation of Bugle, etc.—have had to be abandoned owing to snow, which set in early this morning, and still continues. We got out yesterday at 5.30 p.m. all right. Poozy to get one’s clothes off and have a bath. Gibson and Barcroft turned up last night. Have to go to an anti-gas lecture this p.m. Next night we only go four days in. Roads fearful again.

‘Barossa Day’, commemorates the capture of the Imperial Eagle of the French 8th Regiment by the 87th Regiment of Foot at the Battle of Barossa on 5 March 1811; it was the first such capture during the Peninsular wars. For comments about the similarly unsuccessful Barossa Day in 1916 see the letters of 28 February, 8 March, and 14 March 1916. 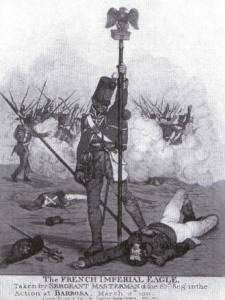