Another blustery, showery wet day. Splendid, 444 pairs socks coming. We went into the line only 367 last time. This time we should be well over 400 again—all the difference in getting work done. The R.E. did repairs outside of Elephant, but are going to put in concrete floor and mend wooden partition. Two new officers joined today, five more en route. One is Darling, son of Dr. at Lurgan. Godson has gone to Bde. Intelligence Office for a few days. The change will do him good; he is a capital fellow. Was at Oxford, law degree, and after being called to the Bar he went on the Stock Exchange. He has ideas, and is A1 at Intelligence work, and in charge of snipers. What with carrying parties and working parties, we have no time for any parades this time. Hope we may have a few fine days when we go back next time. Tuesday the whole Push marched into B_____, [Bailleul] goes to Cinema, Follies, then tea and then roam round for a few hours on their own and then home. Div. band to march too, I hear. The place is quite comfortable. Judge Green made a very nice reference to ‘At.’ at Lurgan Quarter Sessions. Would rather like some magazines now. ‘19th Century’, ‘Contemporary’. I find I want something these long evenings. I’m glad to say we’ve got one Military Medal for the raid—one Sergt. Wolfe, son of Pratt’s gamekeeper, a very fine gallant boy. 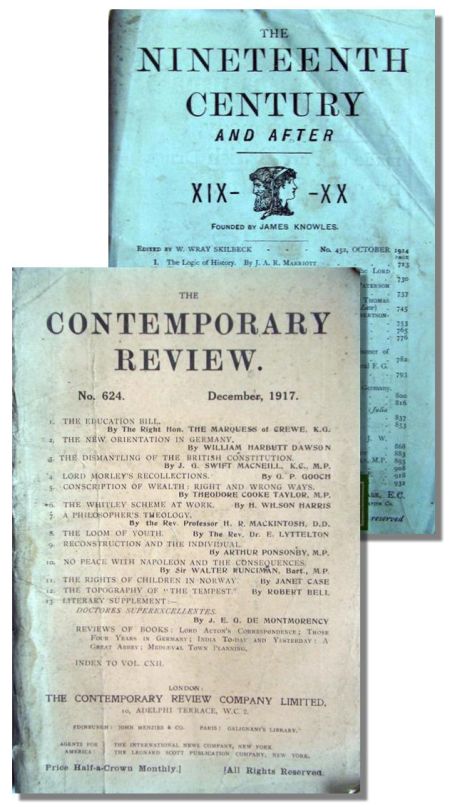 The Nineteenth Century and The Contemporary Review