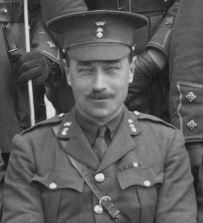 Such a roaster today. Thick fog up to about 8.00 a.m. You will see by enclosed that I am losing Pratt. I am very sorry. Of course, he has been of enormous help to me. Have been wandering round trenches, planning, etc., and making preparations for winter. I believe we shall move our H.Q. shortly to another farm—better in all respects, but too far from the front line. G.S.O.1. looked in today; so pleasant and helpful. I am sitting in shirt sleeves (as I have been all day) and perspiring at every pore. The afternoon trench mortar strafe now begun. I got a delicious ‘dig’ at Bde. staff today.

Major A C Pratt was promoted to Lieutenant Colonel and appointed to command 11th (Service) Battalion, The Royal Inniskilling Fusiliers (Donegal & Fermanagh). For his service with 9th Royal Irish Fusiliers he was awarded the Distinguished Service Order. He was killed in action during the Battle of Langemarck on 16 August 1917. Originally buried near where he was killed at Wieltje, his remains were reinterred in Ypres Reservoir Cemetery in 1919.